I have created a series of female/feminine sculptures – and it´s called A Trinity of Femme Fatales. They are still designed in a kind of ugly-aesthetic way, but there can be no doubt. These dangerously seductive ladies will bring insight, danger and renewed lust to your life. There is nothing like being attracted to – and seduced by a well-placed rubble of used hi-tech stuff and epoxy resin. You will want to lick them. Enjoy this new art!

A small reminder: The use of words to describe artwork is completely subjective, and artwork may mean different things to different people. Just as a proclaimer. 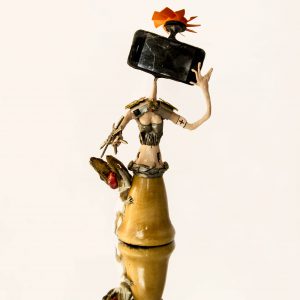 Lets talk art! The point, meaning and metaphysical dimension of the work. In other words – what I thought while I was making it. This mixed media garbage sculpture is part of a trio of femme fatal, sometimes called maneaters. It´s a short twisted story of womanhood.

Star Trek, a Croc-Mick-Jagger and a weapon:

This is a gathering of ideal culturally perceived “female” values. In a nutshell. The first thing to make a note off is the hand. She makes a Star Trek, Volcan hand sign: Live long and prosper. That is the word if you’re a nerd/Trekkie – dear reader.

A cross, dress and an iPhone:

The Red Cross: An aid organization that helps people in need and it´s the symbol of humanism. I do believe in humanism, but I was hearing a strange and very angry radio program called Je Suis Jalving. It was intentionally rightwing-biased and 85% fear mongering. You know the Muslim’s are coming to take over the world. ISIS, the califate, illegal migrants are stealing our jobs… and so on. So I placed The Red Cross band on the left arm because the rightwing groups new enemy is the goodness industry… U know like the Nazis (the incarnation of evil in western thought and the 20th century).

The dress made of wood. WTF! Lady Gaga made one out of meat. A lady’s dress must at least be red. Red is the colour of blood, roses, and hot chilis. It’s a very passionate colour. Red can mean anger or desire. BUT Wood. Is a shitty brown colour! Why? It´s all about the ecology, one with nature and love.

What about the iPhone and the air fan (lady hat), you ask? All will be answered in due time.

Recorded and filmed on Iphones